Most solar pholtovoltaic (PV) power systems use stationary panels. These panels will only yield their highest amount of energy at one point of the day, when the sun passes directly over the panel. A solar tracking system makes the panels follow the sun’s path through the sky. Tracking systems yield significantly more energy than stationary systems.

On a clear day, the portion of sunlight that is diffuse radiation can be as low as 10%. PV systems need to capture as much direct radiation as possible.

The Benefit of Solar Tracking

When a solar panel faces the sun directly, it captures the most direct radiation possible, as illustrated below.

The panel on the right, which directly faces the sun, catches more “sunbeams” than the one on the left . The panels are the same size and are centered at the same position.

We ran a test measuring the energy collected from a tracking PV system and a stationary system on a clear summer day in California. The figures were jagged due to shade and other interference, but the smoothed shape of the graph is this:

The graph shows the portion of the panels’ highest power yield for the day throughout daylight hours. As the sun rises, its direct solar radiation takes time to reach its peak. A tracking system follows this rise without loss, while a stationary system waits until noon to achieve its maximum power. The slight decline in power into the afternoon is due to heating of the system.

The results vary depending on location, season, and weather, but generally they will look the same: tracking systems quickly reach a plateau of power for several hours, and stationary systems only briefly reach their maximum power around midday.

Components of a Tracking System

There are a lot of factors that impact the performance of tracking system that should be considered. In a field of trackers, if some trackers cast a shadow on the others, then the field isn’t doing much good at all. If a storm comes on, solar panels are at risk of damage. Solar trackers should be able to should be able to stow in a safe position in these conditions. 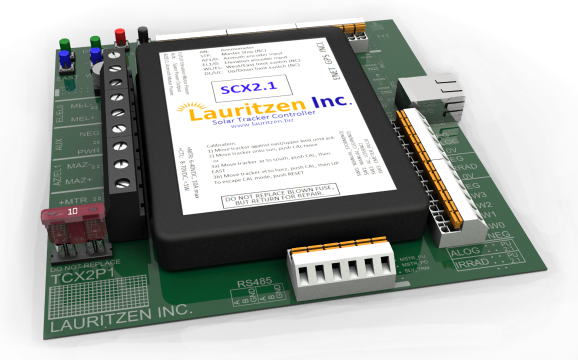 Lauritzen Inc. offers a line of solar tracker controllers that take these factors into account, and come with a wide range of features that enhance system safety and control. The most notable of these is remote management. With Lauritzen Inc.’s management software, you can control your tracking system from a computer or smartphone, either locally or through the internet.

Our controllers are all based on the CX2 hardware platform, with specialized software to suit either standalone trackers or fields of many trackers. We can provide controllers specialized for your specific tracking system. Contact us, and we will determine which tracking solution is right for your situation.

2 thoughts on “What is solar tracking?”